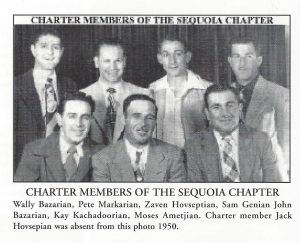 In 1950, some of the brothers of the Selma chapter of Triple X Fraternity approached Mose Ametjian of Tulare to discuss the possibility of forming a Triple X Chapter in and around Tulare. Mose told them that such a chapter was possible and he went to work making this a reality.

Twenty-five Armenian young men were contacted, and about ten of them were interested enough to gather at Mose’s house and listen to the brothers of the Selma Chapter outline their plans. They were accepted by those attending; thus was recorded the first meeting of the Sequoia Chapter. Those attending were to become Charter Members; Mose Ametjian, John Bazarian, Kay Kachadourian, Nish Hovsepian, Jack Hovsepian, Pete Markarian, Wally Bazarian, and Sam Genian. A Charter was received on April 22, 1950. The first meeting was held in a small room at the Hotel Johnson in Visalia, California.

The beginning years, when there was the usual lack of funds, meetings were held at members’ homes, with the wives giving great moral support by setting up the refreshment table. But then, things grew brighter, the financial status became healthier, and meetings began to be held in various halls and banquet rooms.
We remember the picnics at Mooney’s Grove in those early days. There were not quite a hundred people attending. By contrast, at our 15th Annual Picnic, there were nearly 600 people. And the sizable profits were, as usual, donated to a number of worthy charitable organizations. Our most important charitable affair was the Annual Charity Dinner-Dance held in Visalia. Being always a sellout, proceeds from that affair went to our favorite institution, the California Armenian Home for the Aged, in Fresno.

Our name was known and highly respected in our area, and our Chapter had attracted many vital members. At the time, we comprised of 41 active brothers. Our brothers are hardworking and distinguished themselves in both their fraternal and private lives. Our Chapter had the honor of hosting several Fraternity Annual Conventions in the Valley, with the greatest of success. It prides itself in having possessed the Annual Achievement Trophy given each year by the Grand Chapter, the Fraternity’s governing body. (The above adapted from the writings of Brother Mike Cholakian (dec’d) found in the 1969 Yearbook).

Thirty-some years since the last yearbook was published, Sequoia Chapter thrives like never before. Our membership is 50+ strong and growing each year. Thanks to the wise foresight of several brothers many years back, our financial situation is at peak performance since much of our money was invested in good quality mutual funds during those early years. We were fortunate to be able to recently give a pledge of $40,000.00 to complete the Arbor and $40,000.00 to complete the new Boat House at the Church Camp. We constructed a permanent building of equal value at the World Ag Expo in Tulare, (this the world’s largest farm and equipment show), where we served up the best Shish-Kabob sandwiches to people from all around the globe each February.

Our brotherhood is comprised of hard-working and giving brothers. Our two annual fund-raisers help us to make donations to our favorite Armenian and Community Charities. The first being the World Ag Expos Shish-Kabob booth and our 4th of July fireworks stand. We also have continued the traditional Annual Family Picnic as well. It is with great pride that we continue to receive the Achievement Trophy, during the 2000-2001 year.

Sequoia is happy to report that the Tri-Chapters (Sequoia, Selma & Fresno) Dinner Picnic continues to grow each year. We also held four annual Picnic meetings each year whereby the finale is the Kingsburg Lamb-Shank feed. It is not surprising that many of our events revolve around food. And who could resist when The Five Brothers are cooking! These brothers include PGM Jerry Poochigian, PGM Pete Babagian, PGM Ron Shanoian, Gerard Garoian, Dean Ametjian, Gary Gostanian and many more.

Over the past 42 years, we have proudly given out over 120 scholarships to deserving students who enrolled in universities and colleges. These scholarships have promoted the lives of Students of Armenian Decent for the past 40 plus years, and we hope they will continue for many years to come. Sequoia Chapter continues to grow and give back to our community.

We have currently replaced the World Ag Expo fundraiser with our Public Safety/Scholarship Appreciation Fundraising Banquet. In the past five years, we have honored Public Officials in Tulare County. Our goal is to acknowledge and pay tribute to the men and women who work in police, fire, and rescue jobs here in Tulare County. The profits from the event will help support scholarships for the College of the Sequoias Police Academy and our Fire/E.M.T. Programs.

Our 4th of July fireworks stand now the largest in Tulare County. Most of our charitable contributions have increased considerably because of the hard work of our brotherhood and the community members who continue to support us year after year.

Sequoia Chapter was one of the Tri-Chapter hoisting the 100th Anniversary of the Triple X Fraternity. “A Celebration of Success” held in Fresno, PGM Jerry Poochigian and PGM Ron Shanoian were Co-Chairman for the Sequoia Chapter. The Sequoia Chapter hosted the Sunday night “Armenian Kef Time Trex Style.” Everyone enjoyed a Gourmet Armenian Dinner and danced the night away with the world-renowned band of Richard Hagopian with his son, and grandsons. We are marking a very successful convention for the Tri-Chapters Sequoia, Selma, and Fresno Chapters.

Our membership is 60+ strong now and growing each year. At the Sequoia Chapter, the brotherhood is close, and we regard each other in the true spirit of fraternalism. We look forward to attending our monthly meetings; we also socialize outside of the fraternity functions. It’s a common sight that when you run into one brother, you may run into two or three.

As we enjoy the success of our Chapter, we find it appropriate to fulfill our obligation to the entire Fraternity. In recent years, several members have served on the Grand Chapter. We look forward to the future of supporting our Grand Chapter and holding more Grand Chapter offices.

The next 100 years to come bring on new challenges to Sequoia Chapter as well as the Triple X Fraternity. The strength of Sequoia Chapter has been membership and brotherhood. We also encourage young Armenians to join with us and carry on our Armenian culture and traditions. We are truly blessed as a Chapter.